Last weekend, we got the bulk of our seeds planted.  Our daughter’s awesome preschool teachers saved milk cartons for us for a few weeks – a great big THANK YOU to them!

We used the milk cartons and the seed starting mixture from Walmart.  We fill the cartons with the seed starting dirt, make a whole and put in roughly 3 seeds.  Fill the hole loosely with dirt, water (not too much) and cover with plastic wrap.  Last year I started using big tin foil lasagna pans (also from Walmart) and they work great to keep all the plants contained and generally under our grow lights.   I am not sure how many plants we started yet, but I would estimate it is around 200.

Aerial view of some of the seeds we started:

One week later…signs of life! 🙂

This year we ordered our seeds from Baker Creek Heirloom Seeds and Seed Savers Exchange.  This is in addition to seed that we saved from last year.   I am also ordering seeds from Turtle Tree Seeds, Bountiful Gardens and Horizon Herbs.  We have ordered from them in the past and have been very happy with quality.

I also thought I’d share a few of the varieties that I’m the most excited about:  Black from Tula tomato, Ivory Pear Tomato, Syrian 3 Sided Pepper, Cour di Bue cabbages and Genovese Basil. 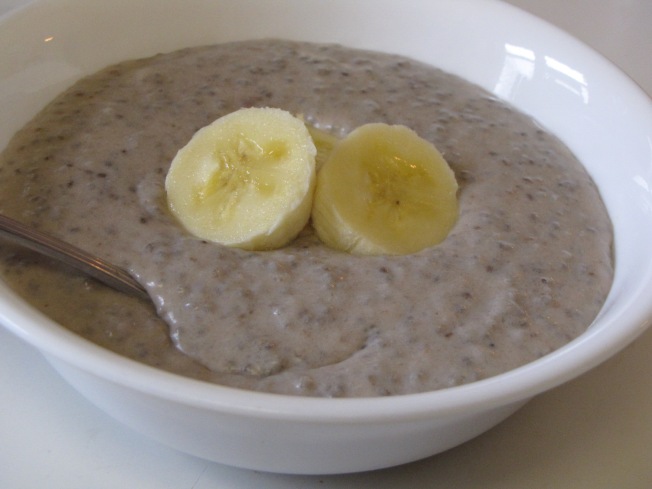 We had this for breakfast yesterday morning (and again today)…and it was so good.   Lots of good natural fats and Omegas, with minimal added sweetener.  I made a huge batch so we can get more than one meal out of it, but you can certainly adapt it however you see fit. 🙂

1 T. vanilla (click here to see how to make your own)

Blend the coconut milk, vanilla, dates and bananas until smooth.  It can take a little while, and you may have to scrape the sides of the blender and help it along a bit.  Be patient, it’s worth it. 🙂

After the other ingredients are blended well, add the chia seed and blend until it is evenly dispersed.  Hand mix if you can’t get it well enough.  I think it would be preferable if you could chill this overnight…but I was short on time.  I made it, let it sit 15 minutes, and it was still good. 🙂

You could have this for a good, healthy breakfast, snack or dessert.  Top with sliced bananas, chopped walnuts, whatever you want. 🙂  Enjoy!

I’m doing a series on progress of different family members on the GAPS Diet, and thought it would be easier (and shorter) to go person by person instead of running it all together…

My 9 year old son had a long history of asthma and allergies since infancy.  He always met our family insurance deductible every year by February.  He was always sick, took daily nebulizers and inhalers, and was frequently on antibiotics and/or nebs from the age of six months old forward.

I know I’ve talked about this before in other posts, but a large part of our health journey started with him.  He ended up getting so sick at one point that he missed school and a friend’s birthday party because he literally couldn’t stop coughing, even with all his nebs and inhalers.  It lasted for a couple days – constant barking cough.  It was really the last straw for us, because even his meds were failing him.

We started with our integrative physician, who diagnosed him with multiple food allergies and systemic yeast.  His initial treatment was a few months of Diflucan, some targeted supplementation and a drastic change in diet eliminating white flour, white sugar and potatoes, and his  food allergens.

During this time, we also discovered that he reacted severely to red food dye in particular.  He once got so angry after having a red sucker, after being off of that stuff for awhile, that he broke the remote control in a fit…which is completely not like him at all.  If your child is struggling with behavioral issues, that is the first thing I would totally recommending getting rid of.  Besides, they’re all petrochemicals anyhow – who wants to eat what you’re putting in your car for fuel???  Not me.  I’ll include a link to the Feingold Diet for anyone with further questions on this.  I should note that this was not an isolated incident, and that whenever he had these types of “food” (I use that term loosely), we would see this angry, irritable and teary behavior.  I will suffice that we do not feed him these foods at home, I will not even purchase these “foods”.  School can be difficult with parties or rewards, and sometimes as a measure to make him feel not entirely isolated…we do allow it.  Not often, but every great once in awhile.

Anyhow, after his initial treatment above, his asthma and allergies entirely went away.  He has been off of all asthma medications for three years, and I don’t believe that he has had so much as a sniffle during that time.  No antibiotics or steroids, or nebs.  YAY!  In fact – last year he got the “perfect attendance award” at the end of the school year.  🙂

We tried to continue with his recommended food allergy and candida (yeast) diet, which became more and more difficult.  He had a constant run of treats in school, birthday parties, and kids’ sports events where that cruddy stuff is prevalent.  Cheating once in awhile became cheating alot – several times a week.  While the asthma and allergies never came back, my son developed a whole new set of symptoms last spring.  For the first time ever, he started to develop severe facial tics that our doctor later noted as Tourette’s – either related to food allergies or yeast.  He also started to develop severe, weeping eczema that he had not had since he was a baby.

At this point, we decided that he would benefit greatly from GAPS.  Because of all of these “life is hard” situations, we had tried to avoid it with him, but we were definitely there.  He started in June of 2013, right after school got out for the summer.  We noticed that the eczema was stubborn with him, and did not go as quickly as it had with our youngest.  I would say that he had really stubborn spots for at least two months, but then it did go away.

The facial tics took longer.  Our doctor noted that the neural cells heal so slowly, that it would probably take six months to see major improvement.  And that it did.  We did see the tics slow down in number and intensity fairly quickly, but they did not go away altogether until November.

A personal confession here is that in two years of doing GAPS myself, I have never really gotten a great handle on how to deal with expectations for treats and parties and holidays, and always find myself getting sucked into repeat ugly food situations during those times.  Generally in excess.  You’d think I would learn, huh?  During the holiday season, the tics that had vanished had come back with a vengeance, and the eczema came back on a milder scale.  We had him do a couple weeks back on the intro portion of the GAPS Diet after the holidays, got back on track with his probiotics and cod liver oil, and found that we were able to reel in those symptoms alot quicker.  One observation is that we really weren’t allowing him to have his food allergens during this time when the symptoms recurred, or gluten, but he did have sugar during that time.  So for him, sugar = neurological issues.  I would guess that he is not alone.

He has been a total trooper, and has had a great attitude with little to no complaining.  We have been very proud of him throughout it all.  🙂  Fortunately, he understands what brings on these symptoms, and they are unpleasant for him too, so he is motivated.

AFTERTHOUGHT:  I can’t believe I forgot this before…but the other nice side effect of GAPS for my son is that he grew!  He has always been very small, and skinny, and you could see his ribs.  He generally refused to eat nourishing foods, and only wanted carbs  like bread, cereal and of course sweets.  Shortly after we started GAPS, he started eating really well…and HE GREW!  And you can no longer see his ribs.   Hallelujah!

Please be aware that I am not a licensed medical professional. I do not diagnose, treat, or prescribe for any illness or health issue. The information or advice provided here should not be construed as medical advice. The information here is meant to motivate you to do your own research to better your health, and has not been evaluated by the Food and Drug Administration. Please consult your physician or primary health care provider with any medical questions.
appetizers Baking Beverages Book Reviews Breakfast Canning Chickens chocolate dairy desserts Dinners DIY Projects Doctored The Movie eczema environment Family Fish fishing food preservation Freezing fruit GAPS Gardening gluten free health Herbs Holidays homesteading ice cream kefir kombucha lactofermentation Meats minimalism neurological off grid living Paleo Real Food Recipes Salads Sauces Snacks Soups Stews Veggies Whole 30